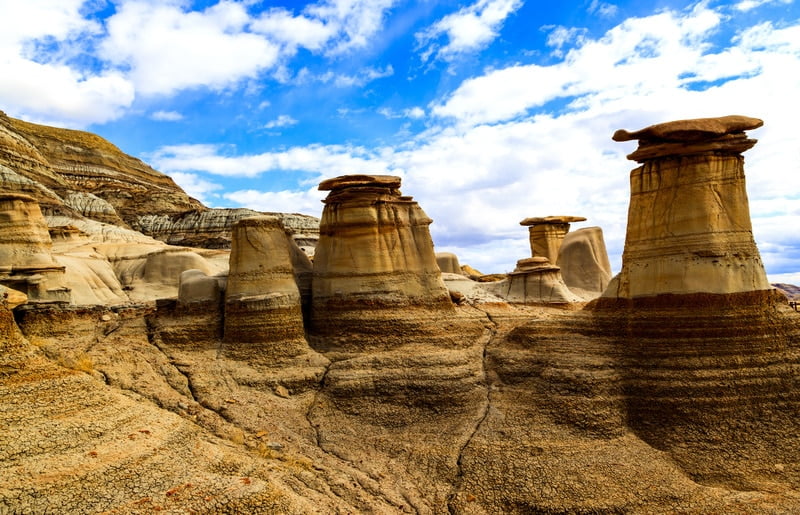 Most readers will likely be familiar with the three types of rocks: igneous, sedimentary, and metamorphic. Many readers may not realize, however, that fossils only come from sedimentary rocks. Why are fossils found in sedimentary rock?

For clarification, let’s describe why we don’t find fossils in igneous and metamorphic rocks.

What Are Igneous Rocks?

Igneous rocks are formed from cooling lava or magma (molten rock). As such, they can be hundreds or thousands of degrees while they form!

Given that they are so hot during formation, the molten rock would destroy any life that might be unfortunate enough to be caught in them. This prevents them from ever forming fossils.

Take a look at the image below which demonstrates a fountain of lava in Hawaii. The extreme temperatures of the lava would destroy any organic material before it could ever become a fossil.

What Are Metamorphic Rocks?

Unlike igneous rocks, which form from cooling molten rock, metamorphic rocks form by using heat and/or pressure to transform an already-existing parent igneous or sedimentary rock into a completely new type of rock. The transformation occurs because heat and pressure cause the parent rock to recrystallize into new minerals that are more stable at higher temperatures and pressure.

The sedimentary limestone pictured above could, with heat and pressure, transform into metamorphic marble like the rock below.

Given that metamorphic rocks form from already-existing rocks, they cannot capture an organism and turn it into a fossil.

Additionally, even if the parent rock were to already contain fossils, then the heat and pressure that cause the rock to transform would damage or destroy any fossils present.

Note that the fossils could potentially survive the recrystallization if both the heat and pressure were relatively low, but if they did, then they would still be altered and/or damaged. Unlike igneous and metamorphic rocks, however, sedimentary rocks make the perfect environment for fossil formation.

How Fossils Form in Sedimentary Rock

Sedimentary rocks form when sediments such as sand, clay, silt, or other materials gradually accumulate into large horizons. Over time, these horizons of sediment harden into rock. As it turns out, this method of rock formation also proves to be the perfect method for forming fossils.

Then, as time passes, minerals present in the sediments gradually replace the materials found in the organism’s body and turn them into rock. This process of fossilization is called permineralization. There are other types of fossilization not discussed here.

These factors combine to make sediments and sedimentary rocks the perfect time capsule to capture ancient life, preserve it, and transport it to the future for discovery.

If you’d like to start collecting fossils, we have a beginner’s guide to fossil hunting that covers the basics of this hobby.

As an example of this process, consider the river delta in the above image. As it flows towards the sea, it deposits sediments (the grey and reddish-brown areas interwoven throughout the delta). As these sediments settle, they may bury leaves, fish, crabs, shells, footprints, or other local life forms. Once buried, these signs of life are then protected and preserved to be discovered sometime in the future as the delta sediments gradually harden into shale.

This image shows a fragment of shale from Australia. Shales like this are often formed from river deltas and other sources of fine sediments.

Now that you’re familiar with the steps of sedimentary rock and fossil formation, can you describe the steps in the image below?

From lower left to upper right:

Why Are Fossils Found in Sedimentary Rock?

Of the three types of rocks, only sedimentary rocks can preserve fossils; igneous rocks would destroy fossils before they had a chance to form, and metamorphic rocks would damage fossils due to their heat and/or pressure during formation.

Sedimentary rocks, however, are great at forming fossils because of their process of formation: sediments gradually accumulate, bury any life present, preserve and protect it, and transport it to the future for discovery.

To learn more about this preservation, check out this article by rockseeker.com.

If you have further questions or anything to add, please leave us a comment. As always, please share this article with others or link to it if you find it helpful.