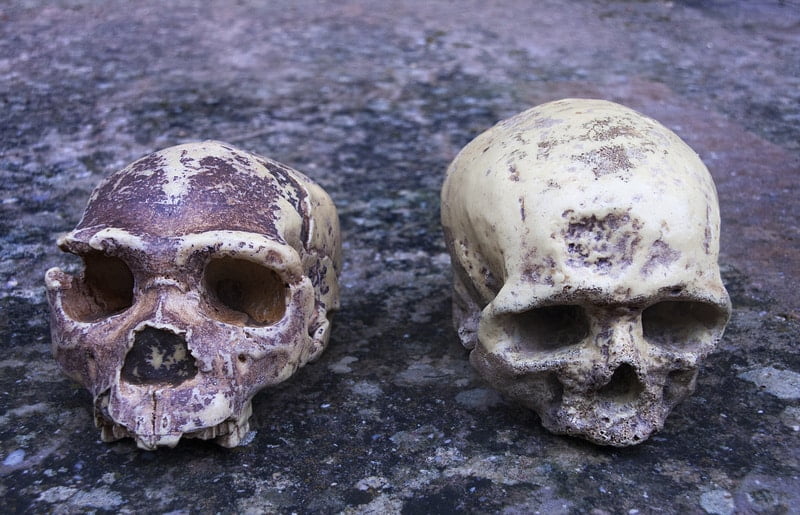 Evolution is one of the most important theories in modern science. It provides a framework for understanding where modern species came from, including our own.

But how do fossils provide evidence for evolution? Fossils provide historical context for life on earth, showcase transitional forms, and explain how life continues after extinction.

Scientists cite many different lines of evidence to support the theory of evolution including genetics, anatomy and morphology, biogeography, observational studies, and more. One of the most important veins of evidence for evolution, however, is the fossil record. Let’s dive in.

Table of Contents
1 The Fossil Record: The History of Life
2 Transitional Fossils
3 Extinction
4 How Do Fossils Provide Evidence for Evolution?

The Fossil Record: The History of Life

The fossil record may be thought of as the ‘history book’ for life on Earth because it contains remains of Earth’s life from when it first appeared roughly 3.8 billion years ago up to the modern day.

If you’d like to learn about fossil dating, check out this article explaining how scientists determine the age of fossils.

When all of these data on ancient life are viewed as a collective whole, they paint a dynamic picture of the history of life on Earth: organisms evolve, live, go extinct, and are replaced by new organisms as the Earth changes alongside them.

This perspective of life on Earth is made possible solely by the fossil record, and it provides strong evidence for the theory of evolution. It demonstrates that life changes throughout time.

In addition to this perspective, however, the fossil record also provides evidence for evolution in the form of transitional fossils and estimates of the total number of species that have lived on Earth throughout its history.

So-called ‘transitional’ fossils are intermediate fossils between different groups of organisms that possess traits of both groups. These fossils provide strong evidence for evolution because they demonstrate one group of organisms changing into another.

To illustrate this point, let’s look at some examples from the fossil record. In this post, we will cover Archaeopteryx, Tiktaalik, and Dorudon.

One example of a transitional fossil, Archaeopteryx lithographica, provides evidence for the relationship between the theropod dinosaurs and birds.

To clarify, theropods include most of the carnivorous dinosaurs such as Allosaurus, Tyrannosaurus, and Velociraptor.

If you want to learn more about Archaeopteryx, the Britannica website has a great article on this amazing dinosaur.

Another example of a transitional fossil is Tiktaalik roseae. This ancient fish-like animal shares many traits with tetrapods or four-legged animals. This fossil has fins, scales, and gills, linking it with fish, but it also has a flat head as well as a tetrapod-like neck and ribs. This links it with tetrapods, as you can see from the fossil Tiktaalik on display at the Field Museum in Chicago.

For the final example of a transitional fossil, consider the early whale Dorudon atrox. This whale lived about 40 million years ago and shares many features with modern whales, but it also has several unusual features not seen in modern whales.

Compare the images of Dorudon atrox and a modern Sperm Whale, Physeter macrocephalus. See if you can spot any differences.

Dorudon atrox, the top skeleton, compared to a modern whale. Notice the rear limbs in the center-right of the image.

The biggest difference between the two skeletons above is their limbs: Dorudon has rear limbs and longer, more developed forearms, while the Sperm Whale has completely lost its rear limbs and has stubbier forearms: its digits comprise about half of its total arm length, while the Dorudon’s digits comprise only about a third of its total arm length.

For reference, check out this Sperm Whale skeleton. Note how tiny its pelvis is. Is it missing anything?

Another piece of evidence for evolution provided by the fossil record lies in the total number of species that have lived throughout time. Although the Earth currently supports up to millions of species, many more have lived in the past. Scientists generally agree that 99.9%, or 999 out of every 1000 species, have gone extinct.

To reach such an estimate, scientists use various methods such as estimates of Earth’s current biodiversity extrapolated over the past as well as species and trends discovered in the fossil record.

For so many species to have existed and gone extinct throughout Earth’s history, evolution becomes a logical necessity: how else could so many species have already come and gone before the species alive today? Where did all modern animals originate?

Evolution provides the answer. It offers a mechanism by which new species arise; a process called speciation. Despite the extinction of nearly all living things to exist, new life forms emerge to take their place.

How Do Fossils Provide Evidence for Evolution?

Many veins of evidence support the theory of evolution, but one of the most important is the fossil record. The fossil record paints a dynamic picture of the history of life on Earth.

The fossil record demonstrates that life on Earth changes over time. Further, it provides transitional fossils, which are intermediates between two taxa. Finally, it provides an estimate of the total number of species that have lived on Earth throughout its history, which logically necessitates the theory of evolution.

If you found this topic interesting, please share it with others. If you have any additional questions or suggestions, leave a comment below and stay tuned for the next article.