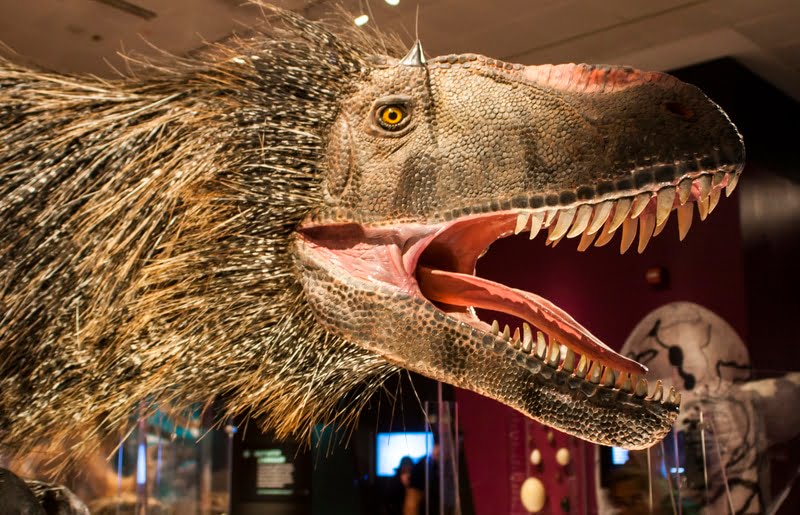 Most people have seen depictions of Tyrannosaurus a thousand times: they’re fearsome, likely hungry given their invariably open mouths, and covered in lizard-like scales. Some artists, however, take a different approach.

These deviants show the beloved T. rex covered in feathers. While most people reject change for simply psychological reasons, others may wonder if they’ve been wrong all these years.

So which is it: did dinosaurs have feathers or scales? The simple answer is that it depends on the dinosaur. Birds and some non-avian dinosaurs were covered in feathers with some scales while the majority of dinosaurs had only scales.

Some Dinosaurs Had Feathers

First, let’s start with the obvious: without question, at least some dinosaurs had feathers. We know this due to some excellently-preserved fossils that contain feathers.

For example, check out this fossil of a 99 million-year-old dinosaur tail preserved in amber. The thin, wispy structures that line the tail are its feathers.

If you’re not convinced that it’s a dinosaur tail, ask yourself when was the last time you saw a bird with a bony tail.

As another example, the above dinosaur fossil, Archaeopteryx lithographica, has feathers lining its tail, legs, and body as well as radiating along its arms.

Archaeopteryx plays a significant role in the study of bird evolution. You can learn more about this animal in our article that discusses how fossils provide evidence for evolution.

For yet another example, consider the above fossil of the dinosaur Microraptor gui. It has feathers surrounding its body as indicated by the white arrows.

For our last example, examine the above fossil of Caudipteryx. Can you see the feather impressions lining its limbs and tail? Look for the gray streaks.

In summary, as demonstrated by fossils, some dinosaurs undoubtedly had feathers. These dinosaurs fell into a group known as theropods.

Astute readers may have noticed that the fossils listed above came from only one group of dinosaurs: the Theropoda, or “meat-eaters.” Indeed, many scientists believe that only the theropods had feathers and that all other dinosaurs were covered in only scales and not feathers.

Confusingly, however, scientists have found a few fossils of feathered dinosaurs that are only distantly related to the theropods. One of these dinosaurs is the plant-eating ceratopsian Psittacosaurus mongoliensis. Note the spike-like projections on the end of its tail in the top left.

Because of dinosaurs like Psittacosaurus, some scientists speculate that feathers could have been found all over the dinosaur clade. They suggest that even dinosaurs such as Triceratops, Iguanodon, or Edmontosaurus could theoretically have had feathers. Not all scientists agree with the above idea, however.

For one thing, there exists disagreement as to whether these ‘feathers’ found on non-theropod dinosaurs are true feathers at all. Rather, they may simply be an example of convergent evolution that produced feather-like structures that merely resemble feathers.

In essence, convergent evolution is where non-related organisms develop similar features to fulfill a specific purpose. Wings, for example, evolved in pterosaurs, birds, and bats at separate times for a similar purpose. For more on this topic, check out this article by sciencedaily.com.

Furthermore, scientists have discovered fossilized skin from many dinosaur species including the armored, horned, and duck-billed dinosaurs. In all three of these groups, their fossilized skin shows scales, not feathers.

Consider the above impression of Hadrosaur skin. Do you see any feathers or feather like-impressions or do you only see scales?

As succinctly stated by Paul Barrett, a dinosaur researcher at the Natural History Museum, “We have really strong evidence that [many non-theropod dinosaurs] did not have feathers.” He adds, “We also have zero evidence of any feather-like structures in the long-necked dinosaurs.”

Because the vast majority of feathered dinosaurs are known to have been theropods, most scientists, therefore, believe that feathers were largely restricted to the theropods. Any other dinosaurs that had feathers or feather-like structures likely acquired them through convergent evolution.

Why Did Some Dinosaurs Have Feathers?

Just consider how many uses modern birds have for their feathers: they use them for all of the above reasons and more. Some birds use their feathers to help them swim while others even line their nests with them. They come in a myriad of different color schemes as well.

Given all of the above, you may be wondering: did T. rex have feathers or not? Have we found any feathered Tyrannosaur fossils?

Did T. rex Have Feathers?

To date, scientists have not found a feathered T. rex fossil. They have, however, found feathered fossils from the more primitive Dilong paradoxus.

Given that T. rex is a theropod, and that scientists have discovered a closely related species with feathers, it seems obvious that T. rex had at least some feathers. It may not have had a full plumage throughout its entire lifespan, however.

A common misconception is that an animal as large as Tyrannosaurus would overheat from feathers. We have no such formal consensus on the maximum body size for animal feathers, which is simply speculation. Most people misunderstand the ability of feathers to regulate body temperature.

Many would cite that modern elephants have less hair than their ice age counterparts as evidence that large animals lost body covering to reduce heat. This statement misinterprets elephant evolution, yet this is a topic for another article.

In short, feathers are not hair. They possess unique traits. Check out this article from enclyclopedia.com for more information on feathers, scales, and hair.

Since only small skin impressions of T. rex have been documented, we cannot know for sure at this point. This requires us to make rely on evidence from other animals to make conclusions. It should be noted the error in considering this topic in the way of a jury trial are flawed.

A lack of evidence for feathers does not create an innocent until proven guilty scenario. Fossils are incredibly rare given how many life forms have lived and died throughout time. Feather preservation is monumental and only occurs under ideal conditions.

Imagine if the building where the crime had been committed was burned to the ground leaving only a small portion intact. That portion was then stolen and buried in the ground for millions of years in an undisclosed location.

The most logical conclusion is that T. rex had feathers at least during part of its lifespan. If feathers were lost as the animal aged, they would not be replaced by scales but by patches of bare skin. These two attributes are not mutually exclusive.

Birds have both feathers and scales on different parts of the body. The scaly skin impressions of T. rex may not be broadly assumed to imply its entire body was covered by scales. Though this topic remains debatable, it’s our opinion based on the evidence that Tyrannosaurus had some mix of feathers and scales.

Did Dinosaurs Have Feathers or Scales?

We know that at least some dinosaurs had feathers due to exquisite fossils of feathered dinosaurs.

Most feathered dinosaurs belonged to the Theropoda, although a few dinosaurs unrelated to the Theropoda also had feathers or feather-like structures due to convergent evolution. Feathers conveyed many advantages to dinosaurs including but not limited to temperature regulation, signaling to other animals, and flight.

Despite most popular media depictions that have continued to portray outdated dinosaurs. The Jurassic Park franchise has often been critiqued for portraying their Velociraptor without feathers. The latest film, Jurassic World: Dominion will be the first major Hollywood dinosaur film to showcase feathered dinosaurs.

T. rex likely had feathers, although it is unclear where on the body and to what extent they were present. The largest feathered dinosaur alive today, the ostrich, does not grow large enough for us to discern the maximum body size for feathered animals.

It’s possible that even the most massive dinosaurs had some plumage. This topic remains one of the hottest topics in paleontology and will surely provoke further debate in the coming years.