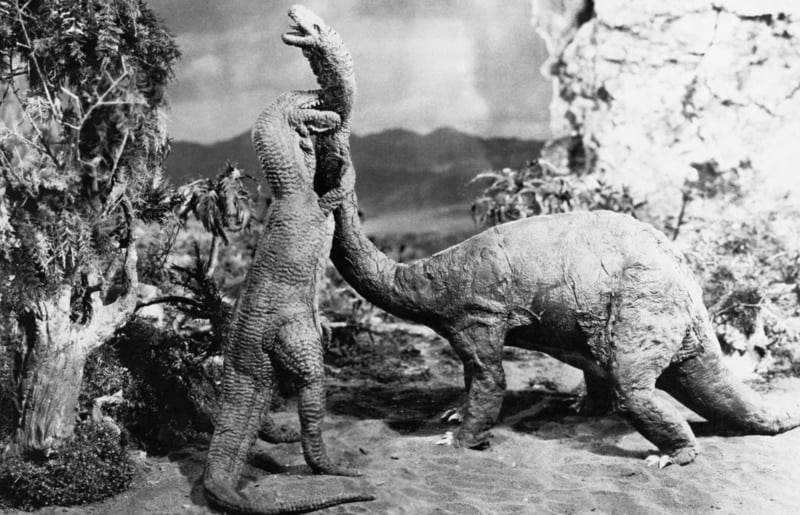 When you hear the word ‘dinosaur’ what comes to mind? You are likely to describe them by using one of the common examples of dinosaurs in media. Many of us remember a particular movie or book we viewed as a child. This became the definitive picture of a dinosaur in our minds.

It is easy to accept our perspective rather than follow scientific journals for the latest discoveries. Most dinosaurs are long gone. We lack the same connection as we do with other animals. Thus, we turn to the media to understand them better.

Dinosaurs were once thought to be sluggish and dumb creatures. Now, they are considered far more intelligent and active than previously thought. The shift in public opinion did not happen overnight.

There are very few similarities between our modern concept of dinosaurs and those from the past. Dinosaur art from just a decade ago is outdated. This shift reflects the work of paleontologists and the implementation of new technology.

The reclassification of birds as dinosaurs was the most dramatic shift in our understanding. We have come a long way from the reptilian beasts imagined during the nineteenth century. The connection to birds changed an entire field of science. How can dinosaurs in the media change public understanding?

The emergence of new media provides exposure to paleontology. While the general public lacks a broad understanding of paleontology, most people have some fundamental knowledge. The information age brings many topics to the forefront of discussion that never would have been headlines in the past. This newfound information is linked to the growing public interest in dinosaurs.

We live in a time where answers to many questions are only a few clicks away. Google is a great tool to learn about even the most obscure of things. Sites such as ours exist to teach people about these topics in a meaningful way. Without even seeking out this information, many people stumble upon dinosaur media and use this to grow their understanding.

The information age, however, produces several problems of its own. Prevailing misconceptions spread like wildfire as anyone can take an active role to perpetuate misinformation.

Oftentimes bloggers and even professional journalists lack the effort or the education required to accurately relay information. This results in countless sensational articles that misrepresent scientific knowledge.

Representation of Dinosaurs in The Public Sphere

As a writer, catchy headlines may tend to outweigh scientific accuracy. Many writers do not have a full understanding of the topics that they cover. As a result, these types of articles can spread misinformation. We have seen this grow worse through social media.

Science often produces lackluster results, leaving more questions than answers. Things are rarely packaged neatly with clear results. Rather than noting the limitations of any paper, the authors present the given conclusions as facts.

We know that this can be damaging. Although most people realize that movies take liberties with science, they may not doubt an official source. An article from a news source can become the truth to some readers.

When journalists do not understand the implications of a scientific paper, they fail to provide their audiences with a complete picture. Because we cannot realistically expect people to read hundreds of scientific journals, their view becomes limited.

Of course, people rely on media to break down complex material in a digestible format. Therefore, it remains critical that writers consider the impact of their work. But how did dinosaurs enter mainstream culture?

The Origin of Dinosaurs in Popular Culture

The name dinosaur described an extinct group of animals that had never been classified. Several key figures advanced the field long before Owen, yet his prestige at the time created his legacy.

Owen and his colleagues were eager to show the world what a dinosaur might look like. The dinosaur exhibit in Crystal Palace Park premiered in the early 1850s. It showcased dinosaurs to the public for the first time.

At first, dinosaurs were portrayed as large, iguana-like quadrupeds that would be unrecognizable to us. On display were Iguanodon, Megalosaurus, and Hylaeosaurus as well as several pterosaurs and marine reptiles.

While often referenced as poor interpretations of these animals, they did a great deal to increase public awareness. Now, dinosaurs had permeated pop culture.

The lack of complete skeletons limits even modern reconstructions. Now at least, modern paleontologists can reference other known species to fill in the gaps. Imagine doing this without any guidance. For this reason, the Crystal Palace dinosaurs broke significant ground in shaping public understanding of past life.

These statues led to the first inclusion of dinosaurs in literature. Charles Dickens’s Bleak House includes a passage that reads:

Implacable November weather. As much mud in the streets as if the waters had but newly retired from the face of the earth, and it would not be wonderful to meet a Megalosaurus, forty feet long or so, waddling like an elephantine lizard up Holborn Hill.

The public image of dinosaurs would remain rather consistent for decades. News of discoveries began to trickle into the public sphere. One competitive fossil hunting spree would push dinosaur paleontology forward.

The Bone Wars And The Dinosaur Craze

Scientists theorized dinosaur behavior based on existing knowledge of modern reptiles. The major problem in the early days of research on dinosaurs was a lack of fossil material to properly identify anatomy and organize these animals into subgroups.

In the late nineteenth century, two major paleontologists would make huge contributions to science. Their egos would fuel a bitter rivalry.

Edward Drinker Cope and Othniel Charles Marsh would wage a ‘bone war,’ responsible for describing some of the most famous dinosaurs. Each sought to gain notoriety by discovering and naming the most unique dinosaur species.

Significant discoveries include well-known dinosaurs such as Triceratops, Stegosaurus, and Apatosaurus. Cope and Marsh discovered and named nearly 40 new species of prehistoric creatures.

Dinosaurs in Print and on the Big Screen

Movies and books spread images of dinosaurs. The Lost World, by Arthur Conan Doyle, dazzled audiences with the frightening prospect of a world shared by humans and surviving dinosaurs. The novel was such a success that it gave birth to the groundbreaking film The Lost World (1925).

This technological achievement was followed by an even larger film, King Kong (1933). King Kong defeating Tyrannosaurus remains one of the most iconic scenes in film history.

While the success of The Lost World and King Kong made dinosaurs mainstream, an earlier film takes credit for the introduction of dinosaurs to film.

While King Kong takes credit for early dinosaur media, the first animated dinosaur film premiered in 1914. Gertie the Dinosaur by Winsor McCay was ahead of its time. Science played a role from the start.

During production, McCay consulted with various museum experts to try to produce accurate movements for the dinosaur.  Many look at the history of dinosaurs in movies with a critical eye. They ignore the dedicated efforts of many filmmakers to include science in fantasy.

Science is directly responsible for many of the erroneous media portrayals of dinosaurs. The turning point in the collective scientific understanding of dinosaurs would challenge the public’s perception and lead to some of the most visually advanced films of all time.

The New Image of Dinosaurs

The driving element in the changing view of dinosaurs is increasing fossil evidence that the closest relatives to dinosaurs were in fact birds, not modern reptiles.

These fossils indicated the presence of feathers on what appeared to be a small dinosaur. Many paleontologists argued that this animal was a link between dinosaurs and birds. It was the smoking gun.

Creationists, however, remained adamantly opposed to these findings. We break down the misconception that dinosaurs and man co-existed in another post.

Dinosaurs in media, however, would continue to be portrayed more traditionally. This changed after the discovery of Deinonychus in 1964.

The Connection Between Dinosaurs and Birds

Paleontologist John Ostrom argued that Deinonychus was more agile and birdlike than previously thought. Closer observation of the dinosaur bone structure revealed hollow bones with air sacs. These features are found in birds.

Other paleontologists such as Bob Bakker would contribute to the new image of dinosaurs. Bakker illustrated Deinonychus in a way the public had never seen. His book, The Dinosaur Heresies, presented his belief that dinosaurs were warm-blooded (endothermic) and that some may have been feathered.

At the time, this was a radical belief. We now view drawings of dinosaurs without feathers as foreign.

In 1978, Jack Horner discovered Maiasaura, providing evidence that dinosaurs were caring parents. Horner and his team found several nests with broken eggs. Infant remains had bones too weak to walk on their own. This evidence linked dinosaurs to birds through nesting behavior.

The large collection of young dinosaurs shed light on the growth of these animals. While crocodilians provide some aid to their young, most modern reptiles do not take an active role as parents. The fragile bones of the baby Maiasaura required parental care such as that displayed by birds.

Further Evolution of Dinosaurs in Media

In the 1990s, dinosaurs continued to grow in fame. As video games found a new place in the home, dinosaur games brought a new media perspective. Modern movies incorporated science and technology to produce even more accurate representations of dinosaurs.

The 1993 blockbuster, Jurassic Park, was the most noteworthy. This film framed the public image of dinosaurs for the twenty-first century.

Although tainted by Hollywood, the Jurassic Park franchise shows dinosaurs as extremely intelligent, agile, and bird-like. The expanding use of CGI led to several scientific documentaries such as Walking with Dinosaurs. Now we have the potential to recreate truly believable dinosaurs in film.

In 1996, Sinosauropteryx became the first dinosaur described with feathers. The past two decades have yielded a plethora of feathered dinosaur remains. We have begun to see the slow adoption of this new image of dinosaurs in media.

Certainly, public criticism of the Jurassic World movies shows demand for accuracy by some. Movies will likely start creating feathered dinosaurs in the future.

Technology provides new methods of studying dinosaurs that advance the field faster than ever. Computer models can provide insight into anatomy and even behavior. The public fascination with dinosaurs continues to grow. Think of how often you see dinosaurs in day-to-day life.

In the next century, our perspective on dinosaurs may seem as dated as that of Richard Owen back in 1842. Your children may laugh at the current illustrations of dinosaurs.

Our view of dinosaurs changes through each discovery. Dinosaurs in media will continue to change as we continue to learn more about them.

So what do you think? Did we cover the topic entirely or did we miss something? Leave a comment telling us which dinosaur media had the greatest impact on you. If you find this content useful, please share it with your friends.