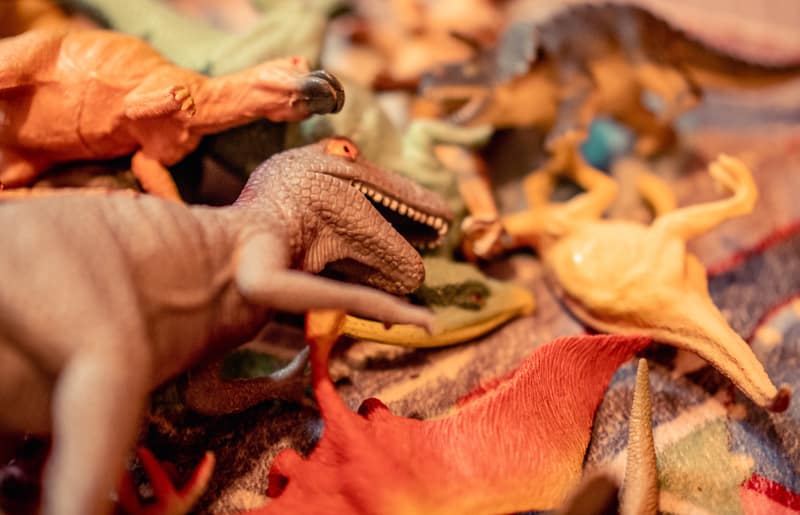 One thing has been held for centuries: children love dinosaurs. They beg for dinosaur toys, adorn their rooms with dinosaur posters, and become engrossed in dinosaur films. The concept of conceptual domains or topics of “intense interest” is the most likely source of this obsession with dinosaurs.

You may wonder: why do kids like dinosaurs so much when most adults take little interest? Psychological research suggests that an early obsession with dinosaurs indicates the phenomenon of intense interest.

Learning about dinosaurs gives children the knowledge that few adults have and allows children to fulfill a desire to answer their questions. Researchers have investigated why children are so fascinated with dinosaurs and why the interest may fade out later in life.

As it turns out, there’s a scientific explanation and defense for children’s deep love of our distant and majestic predecessors. Keep reading as we explore this subject further.

Is Your Child Obsessed with Dinosaurs?

It is somewhat common for parents to discover their child’s interest in dinosaurs sometime after it has developed.  According to a psychology study conducted in 2008 and published in Cognitive Development, children are most likely to adopt “intense interests,” often dinosaurs, without their parents noticing. This usually happens around the age of four.

You might notice that your child is becoming extremely curious about dinosaurs. Some memorize extensive facts and information about dinosaurs and spend hours looking at books.  This is a common trait of children at this stage of development. It’s one that paleontologists recommend you invest in and encourage.

Researchers believe that a dinosaur obsession stems from a child’s instinct for curiosity and discovery. Dinosaurs are an accessible form of science to children. Their young minds can grasp that these gigantic creatures once lived, without needing to understand mathematical principles or, say, chemistry. They’re simply extinct animals.

Many children seek to memorize everything there is to know about dinosaurs. Developing a passion for learning about a topic helps to build valuable skill sets. Children have questions that their parents cannot answer. Then they learn how to research on their own.

Why Do Some Children Gravitate to Dinosaurs More Than Others?

Do not take this to mean that girls who like dinosaurs are abnormal. This article from the Royal Saskatchewan Museum, as well as some sociological research, suggests that boys’ proclivity to dinosaurs is simply a societally-imposed gender norm, rather than a difference in cognitive functions.

Intense interests do seem to develop and intensify when playmates share them. It does seem likely that boys, being more apt to find other boys who like dinosaurs, will develop the interest more deeply than girls, who might receive negative social feedback.

According to the referenced study, around 40% of all children are intensely interested in pretend play. This includes dinosaurs but may also include airplanes or dolls. Whatever a child takes interest in, caregivers should encourage them to pursue it.

Why Should Kids Learn About Dinosaurs?

Kids who are interested in dinosaurs are expressing an interest in pretend play and a propensity for scientific thinking. Girls who develop their interest in dinosaurs may grow up with a continued interest in science and discovery, which could improve the current gender gap in the scientific community.

A dinosaur obsession could be the seed of any child’s interest in science. Children process the world by asking questions and seeking answers, while simultaneously making connections between different topics. If they ask questions that their parents can’t answer, they learn to find answers from new sources.

One passage from the Cognitive Development article summarizes this:

Conceptual domains typically have not been considered in either analyses of talent development or children’s preferred play objects. Parent reports confirm, however, that interest in such domains motivates some children to pursue domain-relevant information through books (typically read to them by others), digital media, videotapes, and toy models that support learning (Johnson, Alexander, et al., 2004).

The development of conceptual interests in young children via www.sciencedirect.com

As an educator, I assure you that these are vital for children’s brain development and critical skills later in life. Paleontologist Ashley Hall noted in this New York Times article that dinosaur interest, for many kids, is a “gateway to science.” The evidence certainly suggests that this is true, leading some to suggest that interest in dinosaurs makes children smarter.

While many children’s interest in dinosaurs might diminish as they enter school age and are required to use brain space for specific learning standards, the joy of discovering and forming connections around the awe-inspiring dinosaurs could lead children to find the same joy in scientific learning.

Cognitively, there do seem to be more benefits to an intense interest in dinosaurs. The 2008 study by the University of Indiana and the University of Wisconsin indicates that opportunities to develop interests like dinosaurs can lead kids to have improved attention and skills for processing complex ideas in systematic ways.

With each new dinosaur discovery, children can learn the similarities and differences of each and gain a sense of accomplishment.

It’s also important that kids learn about dinosaurs because dinosaurs are a topic that we, as humans, are universally drawn to admire. We are fascinated by their dominance of the world, but, importantly for children, we don’t have to be scared of them. Connecting learning with a sense of safety may make children more apt to enjoy the learning process.

Additionally, kids that can memorize facts about dinosaurs will get to enjoy the feeling of knowing more about a topic than most of the adults they know/ Hopefully, that feeling propels them to pursue knowledge across the board.

Did you ever notice how easily children can recite dinosaur names while most adults struggle? We cover the topic of dinosaur names in another article, so take a look if you’re curious.

Adults might even enjoy learning with their children. This can be a great way to bond and create positive associations with learning. Parents or caregivers must demonstrate that learning is a lifelong, joyous process.

Some Benefits of Playing With Dinosaurs

An intense interest in dinosaurs can also benefit children outside of academic settings. As noted in Highlights magazine, giving kids a chance to play with dinosaurs, especially if they’re already interested, often enables them to practice focused attention.

The need to tap into the systematic thinking of their brain prompts kids to focus their attention on the thinking and learning that they are currently doing much more than most activities in a day.

As children age, they become much less likely to have the same intense interests of early childhood. Studies suggest that a child’s obsession peaks between the ages of four to six, but then quickly dies out. Researchers suspect that the structure of standards-based schooling and pressure from peers to have more universal interests may extinguish a child’s fascination for dinosaurs and other diverse topics.

Perhaps one benefit of at-home schooling in 2020 is that young children, having more time to engage in imaginary play with their dinosaur friends at home, might keep their interest in dinosaurs just a little bit longer.

How Do I Teach My Child About Dinosaurs?

As there are so many children who are fascinated with dinosaurs, and even so many adults who grew up loving the Jurassic Park genre, there are luckily an enormous amount of resources available for learning and teaching about dinosaurs.

This website is one place to start! You can read our other articles to learn why paleontology is important or how to conduct paleontology science projects. When your children are old enough, you can take them fossil hunting. I have a beginner’s guide to fossil hunting that covers all the basics.

Resources for Learning About Dinosaurs

A great activity is to buy picture-filled books that explain different types of dinosaurs. Exposing your child to multiple types of dinosaurs can give them a head start in scientific classification and thinking. Visual learners may benefit the most from these illustrations.

Dinosaurs are also an excellent source of independent learning. Children with an interest in dinosaurs can learn through play and their investigations, through books, videos, and the knowledge of other children or teachers at preschool.

You don’t even need to buy books to engage your child in learning about dinosaurs! YouTube has a plethora of dinosaur-related videos, which you can find simply by searching “dinosaurs for kids” (you may want to watch videos ahead of time to ensure they are appropriate for your child).

You can even find read-aloud books about dinosaurs (my nephew loves this one about T. rex). Many dinosaur-showing museums also have online, often interactive, dinosaur exhibits that you can tour with your child from home.

Paleontologists often recommend the Smithsonian or the interactive school program from the Natural History Museums of LA County. If you get the chance, visit your local museums and dinosaur parks. It can make for an inexpensive or even free family activity.

If you prefer to stay away from screens, you can simply play with your child. Educators have published many resources and fun activities that you can do with your kids. Scholastic has published an excellent list, which includes fun options such as creating your own “fossil dig,” dinosaur feeding, count and create, and dino balancing!

Dinosaurs remain a mystery. They were often large and monstrous by modern standards. Children have many questions that their curiosity demands be answered.

In seeking these answers, children often develop an intense interest in dinosaurs. This dinosaur phase is healthy. Children can gain confidence in obtaining knowledge of these animals through independent study. These are important traits that can make children smarter than their peers.

Children themselves may even introduce you to new ways to learn about and play with dinosaurs.  As their intense interest, or obsession, develops, you might just watch them play and listen to the things they say. Even though we know that, scientifically, dinosaur play is helping your child’s brain grow and develop, it can still be fine to let them find their way.

Just while playing Jurassic Park on the play mat, my four-year-old nephew has given me, a writer with an adult-size intense interest in dinosaurs, new ideas to wonder about. I recommend that you smile, enjoy it, and, maybe, learn something new, too.

If you found this article useful, please help us out and share it. Leave us a comment to let us know if your children have a dinosaur obsession.

I am a middle school writing teacher in Dallas, Texas. Growing up, I loved learning about dinosaurs with my dad. As an adult, I continue to love dinosaurs for the wonder and awe they evoke. I hope to use this platform to educate others!