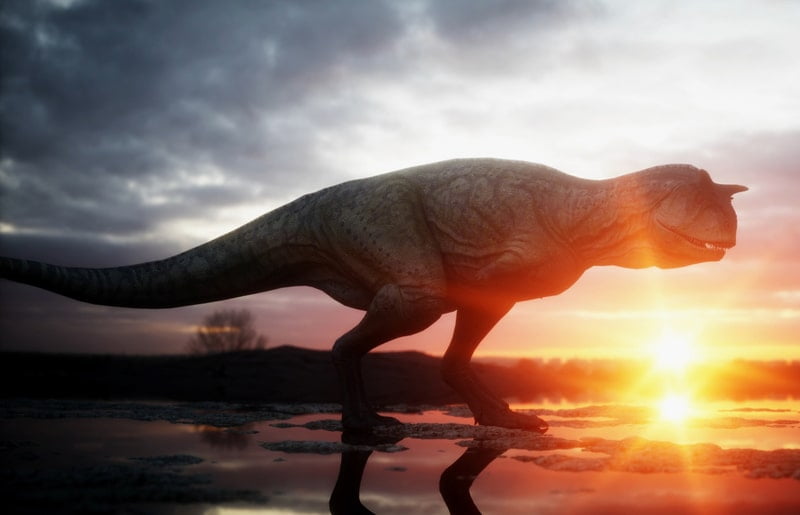 T. rex receives the most attention for being a massive dinosaur with short arms. It’s not the only dinosaur like this. While some dinosaurs such as Deinocheirus were known for their extremely long arms, some dinosaurs had even shorter arms than T. rex.

It’s a question that researchers tackled as it may provide clues that will help us understand more about evolutionary processes. Years of study and discussion have led to dozens of theories.

A few have stood out as the most plausible explanations. The answers range from getting off the ground to holding prey and mates, and even creating distance in feeding frenzies.

Why did dinosaurs have small arms? The best answer scientists can agree on is that they were long enough to serve their biological purpose. Perhaps arms served as grasping or pushing tools but were not used for killing prey.

This is the simple answer, but there is much more nuance to this topic. Read on to learn more about this interesting topic.

Which Dinosaurs Had Small Arms?

Several groups of dinosaurs had short arms including tyrannosaurids, abelisaurids, and carcharodontosaurids. All these groups shared the trait of small arms and large heads.

While stout, their arms were far too small to reach out and grab prey or to lift them to their mouths. This rendered them practically useless for feeding.

Take a look at the Carnotaurus pictured above. What do you notice first about this animal?

Scientists speculate that the purpose of the small arms may have placed these dinosaurs in a niche of carnivores that fed on a specific type of diet. This diet may have differentiated them from dinosaurs with longer arms.

Large skulls provided the primary killing weapon for these predators, relegating the arms to a supporting role. The focus of their evolution devoted more resources to skull development than to arms.

Though it seems logical, experts admit that they’re in the early stages of research to understand why some dinosaurs evolved smaller arms. Relying on fossil remains can be extremely limiting, as it does not provide a large sample size to make statistical inferences.

Evolution of Small Arms in Tyrannosaurs

Say for instance, if the objective was to test the hypothesis that Tyrannosaurus arms decreased in size throughout the 2-3 million-year reign of this animal. In a recent study explained in this article from berkeley.edu, the number of specimens on hand represents just 1 in 80 million individuals.

This makes it hard to draw conclusions about how representative each specimen is to a broader population of animals. In the case of T. rex, the study estimates 2.5 billion of them existed over time.

So even preliminary hypotheses that arm length was evolving smaller among this species over time would require a lot more data. We would need a substantial number of new specimens with intact arm bones for reference.

Researchers develop theories of evolution based on the data available for their analysis, but they admit that conclusions remain sketchy at best. Whether Tyrannosaurus was evolving to lose its arms entirely remains ambiguous.

We stand a better chance when it comes to assessing the evolution of similar dinosaurs throughout time. This increases the number of specimens for study and offers a broad range of specimens in contrast to studying only one type of dinosaur.

When looking at the fossil record, the evolution of tyrannosaurids from Guanlong to Tyrannosaurus provides more context on the body type favored by these dinosaurs. Check out this video from PBS Eons for a more complete look.

Relatives of T. rex with short arms give us a snapshot of trends in dinosaur evolution that favored specific body types. T. rex was not the first dinosaur to develop small arms, it’s just the most popular dinosaur by far. Thus, it becomes a prime target for jokes.

One example of a small-armed theropod is the recently described Meraxes gigas, a carcharodontosaurid that lived 90 million years ago. Dr. Juan Canale, one of the researchers that discovered Meraxes, noted that the arms were muscular and likely served a purpose. He states:

“I’m convinced that those proportionally tiny arms had some sort of function. The skeleton shows large muscle insertions and fully developed pectoral girdles, so the arm had strong muscles.”

Carnale goes on to echo the sentiment of many paleontologists; these dinosaurs may have used their arms for holding mates or for rising off the ground.

Were the arms of these theropods strong enough for this purpose? You may be surprised.

Analysis of fossils indicates that the short arms of Meraxes, like the tyrannosaurs, were muscular and exceptionally strong for their size. These arms may have helped dinosaurs to rise from a prone to standing.

It’s likely that most if not all bipedal non-avian dinosaurs slept on the ground. Balancing a potentially multi-ton frame is very difficult.

So how strong were these arms? Research indicates that T. rex could curl 450 pounds (204 kilograms), vastly exceeding even the strongest recorded humans.

Check out this article from Popular Science that tests the claim that a human could beat T. rex in an arm-wrestling match. In short, not a chance!

Sure, the arms may have been strong, but what about holding mates and lifting the massive dinosaurs from the ground?

Tyrannosaurus and similar dinosaurs had massive legs that were extensively muscled. The arms were only one small component in the overall toolset that dinosaurs used for motion. It’s likely that in conjunction with strong legs, the arms could have provided enough of a push to help the animals rise off the ground.

Small Arms Could Protect T. rex from Themselves

Another theory to explain why dinosaurs evolved small arms is to protect themselves from their bites. The massive, sharp teeth combined with the large heads of these dinosaurs presented the potential for accidental bites.

A group of Tyrannosaurus in a feeding frenzy could easily bite off an arm without realizing it until it was too late. Could a preventative measure such as this occur naturally? Paleontologist Kevin Padian believes so.

Check out this article from phys.org that explores the use of T. rex arms as a preventative measure.

What if several adult tyrannosaurs converged on a carcass? You have a bunch of massive skulls, with incredibly powerful jaws and teeth, ripping and chomping down flesh and bone right next to you. What if your friend there thinks you’re getting a little too close? They might warn you away by severing your arm.

Small Arms Could Hold Onto Prey

The arms of some dinosaurs appear to be too dainty to be useful. It makes most people wonder why their arms evolved into seemingly useless appendages.

As stated before, the heads appeared to have grown larger while the arms reduced further in size. A popular theory poses that the arms didn’t get smaller, but the rest of their bodies grew larger, giving the appearance that arm length was shrinking.

While short, these stubby arms may have been more useful than their size might suggest. Some paleontologists believe that the claws they sported helped them to clutch prey and tear them to pieces.

Powerful arms could aid the jaws in bringing down wounded prey. Big cats, for example, have extensive claws on their limbs that do little to kill prey. Rather, they use their jaws to bite the throat.

Nonetheless, the claws help these predators maintain a grip on the prey. In pack hunters such as lions, a few members may move in for a killing bite to the throat while the others hold onto a fleeing animal.

The Theory of Vestigial Arms

One theory poses that the small arms of dinosaurs may have been a part of the evolutionary process to rid the animal of a characteristic from ancient ancestors. It’s possible that the tiny arms no longer served a purpose, similar to flightless birds with non-functional wings, like an ostrich.

Some scientists believe that small dinosaur arms are vestigial. This theory has fallen under scrutiny by many paleontologists.

Why would dinosaurs continue to dedicate resources to arms for their 160 million-year reign? While the arm-to-body-length ratio decreased dramatically, there are no examples of dinosaurs that lost their arms entirely.

Avian dinosaurs had arms that developed into wings. Dinosaurs such as Tyrannosaurus maintained a great deal of muscle within their arms rather than losing them entirely. This is atypical of vestigial limbs, such as those found in whales or snakes.

In another article, we covered how fossils provide evidence for evolution. If you’re interested in vestigial limbs, this would be a great place to learn more.

Why Did Dinosaurs Have Small Arms?

Some scientists believe there was a reason for the small arms of dinosaurs and that they may have used them to fend off other members of the pack during a feeding frenzy. They may have also served a mechanical purpose for getting off the ground or holding mates or prey animals.

The range of arm motion was limited, but the strength of the arm muscles indicates that while some dinosaurs had small arms, they served a purpose. It’s impossible at this point to narrow down one particular reason, and it may include a multitude of reasons still unknown.

All, some, or none of the current explanations for short dinosaur arms may be correct. Prominent experts in the field of paleontology admit that they are curious about the reasons for reductions in arm size through evolution in dinosaurs. While they may look odd on such large creatures, short dinosaur arms were well-suited for the needs of these animals.

If you found this article useful, please share it with others. We’d love to hear your thoughts about why dinosaurs had short arms in the comments.

I'm an aspiring paleontologist who has been inspired to read, write and research by dinosaurs and other ancient creatures for decades. I particularly enjoy bears, cats, marsupials, crocodiles, and theropods.