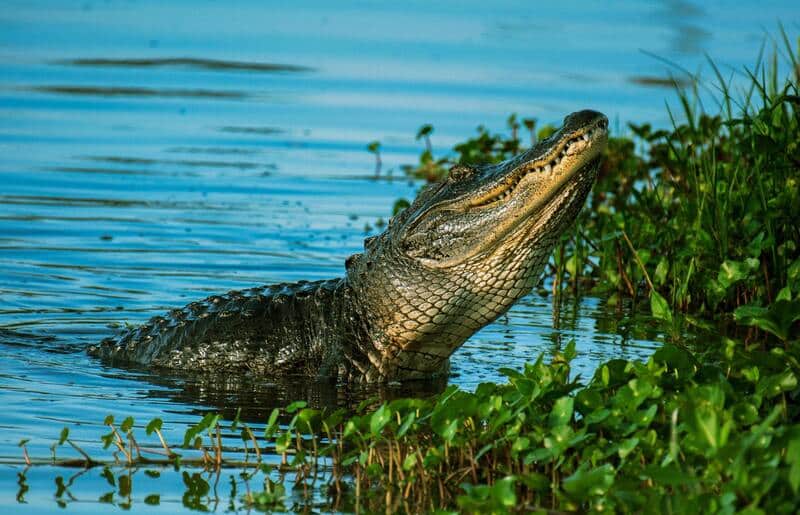 As any dinosaur nerd can tell you, the non-avian dinosaurs all died at the end of the Cretaceous when an asteroid struck the Earth around 66 million years ago. There are countless media references to this devastating extinction that wiped out the dinosaurs.

The asteroid impact drove many other clades of animals extinct too, including many aquatic reptiles. You can see my previous article for more on the extinction of these ancient aquatic reptiles.

If the end-Cretaceous extinction event drove dinosaurs extinct, how and why did crocodiles survive? While we cannot know for certain, crocodilians may have survived due to their lifestyle and physical traits. Crocodilians had slower metabolisms which allowed them to hibernate and consume less food than the dinosaurs.

What Are Some Similarities Between Crocodiles and
Dinosaurs?

For this article, I may reference crocodiles when referring to all extant crocodilians including three distinct families: Alligatoridae, Crocodylidae, and Gavialidae. The same concepts apply to them all.

This means that, at the very least, they have general similarities in anatomy and physiology as well as appearance. You can get a more in-depth look at this relationship on reptilecity.com.

The physical similarities between these groups play into another important factor: crocodiles and many non-avian dinosaurs were fearsome predators. They occupied high positions in their food chains and would therefore have been vulnerable to ripple effects throughout the food chain.

In addition to the above, crocodiles and dinosaurs share an evolutionary heritage, as both are considered archosaurs, members of the subclass Archosauria.

For more on the phylogeny of the archosaurs, check out our article on Jurassic Park phylogeny.

In other words, crocodiles are the closest extant relatives of modern birds and the non-avian dinosaurs, but they’re more like distant cousins of the dinosaurs rather than immediate family.

Given these parallels, it makes sense to conclude that these groups should have shared the same fate at the end of the Cretaceous, and yet, they didn’t. Why?

Why Did Crocodiles Survive the Dinosaur Extinction?

There are several hypotheses for why the crocodiles survived the asteroid impact while dinosaurs did not. These range in believability. Some, such as the idea that crocodiles survived because of their short legs and low bodies or greater inherent intelligence than the dinosaurs, seem a little far-fetched.

Other ideas, such as the assertion that crocodiles had better immune systems than dinosaurs, verge on the inane. The fact that dinosaurs survived on Earth for as long as they did implies robust immune systems, and there’s no way to prove or disprove this “hypothesis” anyways. Other proposals, however, about crocodiles’ habitats and biology appear much more likely.

The resultant tsunamis, debris fallout, and disruptions of the oceanic food chains. Inland bodies of water may have simply been more insulated from the immediate effects of the impact.

Crocodiles have proven extremely resilient over their time on earth. The Natural History Museum website covers their evolutionary arc in greater detail. Here you can learn more about their unique survival traits.

In addition to this potential shielding of inland waters, crocodiles may have been better able to respond to changes in their habitats due to their amphibious habits. Because crocodiles inhabit both land and water, they may have simply been better able to adapt to disruptions of either habitat by switching between them and harvesting resources from both as needed.

Crocodiles’ metabolism and body temperature may have also contributed to their survival. Crocodiles are cold-blooded and grow slowly which means that, among other things, they need to eat far less food, because their bodies aren’t constantly burning hundreds of calories to grow and stay warm.

In the immediate aftermath of the asteroid impact, crocodiles may have found themselves better able to survive due to their lower food requirements whereas the warm-blooded, fast-growing dinosaurs likely could not support their fast metabolisms and therefore starved to death.

Bear in mind that none of these hypotheses are mutually exclusive; it could be that a combination of any number of them contributed to crocodilian survival.

Did Crocodiles Just Get Lucky?

Despite all the competing hypotheses for why crocodiles survived the End-Cretaceous mass extinction when other organisms didn’t, there’s another important factor at play: chance.

Chance factors heavily in determining which organisms survive and which organisms go extinct. This phenomenon occurs because of the unpredictability of changes to ecosystems and what these changes may entail:

In every case, some organisms will be better adapted to handle the new environment, and some will go extinct. Which organisms are favored depends on the change itself.

In other words, the crocodiles may not have been better than the dinosaurs, they may have simply gotten lucky. A different extinction event could have driven the crocodiles extinct instead of the non-avian dinosaurs.

You could instead be reading an article titled “Why did the dinosaurs survive the crocodile extinction?” This article cannot fully explain exactly why crocodiles survived but I hope that I provided some good insight as to the prominent hypotheses.

If you have further questions or suggestions for a follow-up article, please let us know in the comments. As always, sharing this article with friends helps us to know which topics are the most interesting to readers.