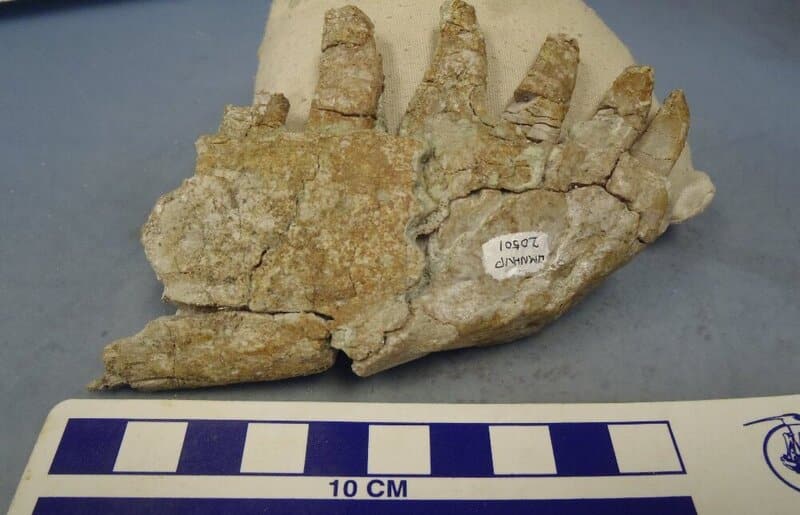 The Utahraptor Project can shed light on a gruesome prehistoric dual. Death at the end of a 9-inch scythe was the fate of many unfortunate dinosaurs around 124 million years ago. Utahraptor ostrommaysorum was undoubtedly one of the most terrifying predators ever to roam the earth, the top killing machine of its day.

Utahraptor has become a particular favorite for dinosaur nerds everywhere. Its notoriety can be attributed to its inclusion in various forms of media including books, documentaries, toys, and video games.

This dinosaur owes much of its widespread popularity to the massive surge of public interest in ‘raptors,’ a group of dinosaurs called dromaeosaurs. Jurassic Park set off a raptor craze in the early 1990s that has continued to proliferate to this day. We live in a time of rapid advancement in paleontology as fossils are subjected to breakthrough technologies.

Recently, paleontologists have uncovered remarkable new fossils from the fossil-rich grounds of the American southwest that could further cement the legacy of this extraordinary beast. Each discovery shapes our rudimentary knowledge of dinosaur anatomy and behavior; this one may prove groundbreaking.

This discovery, however, lies dormant pending proper funding to fully excavate the entombed remains. The Utahraptor Project hopes to make progress on this front by raising the funds required to move ahead on the fossil preparation.

Scott Madsen, Chief Preparator for the Utahraptor Project, manages a GoFundMe page where you can contribute. Madsen is widely regarded for his skill in fossil preparation and is one of the few selected to work on these fossils.

The Discovery of Utahraptor

The first fossils of Utahraptor were discovered by paleontologist James Alvin Jensen in 1975. The dinosaur would not become officially described until another discovery in the Cedar Mountain Formation by James Kirkland, Robert Gaston, and Donald Burge in 1991.

The naming of Utahraptor ostrommaysorum 1993 coincided with the release of Jurassic Park and helped to drive the public fascination with dromeosaurs. The species name honors paleontologist John Ostrom, famous for his work with Deinonychus and for popularizing the birdlike qualities of dinosaurs. The place of Utahraptor in geological time indicates a shift for dromeosaurs evolving smaller and more agile as the environment in the Cretaceous began to shift.

Our Understanding of Dinosaurs

In the past century, our knowledge of dinosaurs has skyrocketed due to the work of many prominent paleontologists. This field of science can see dramatic progress through a single fossil discovery.

Utahraptor remains one of the most exciting frontiers of research due to its age relative to the evolution of dromeosaurs. Finding the fossils of one dinosaur is significant but finding a group preserved is monumental. The data from these individuals could shed light on social structure, life span, diet, and much more.

This discovery could support the hypothesis of dromeosaur pack behavior. The Museum of Ancient Life at Thanksgiving Point currently houses the 9-ton block containing the fossilized remains of several Utahraptor specimens; at least two herbivores, potentially the final meal of these dinosaurs, are also encased in the rock.

The extraction will be time-consuming and expensive. Your donation helps provide funding for the expensive equipment and specialized labor required. The following excerpt from the project’s website outlines the strategy proposal.

Goals of the Utahraptor Project

The donations raised will go towards funding the Lead Preparator position for one year and to acquire the essential equipment needed to get this project started. When we meet our funding goal, our Lead Preparator will be dedicated full time to performing much of the difficult micropreparation on the block, overseeing student and volunteer help, and ensuring the cameras are rolling for documentation and public viewing of the work.

Our Lead Preparator and others working on the project will be able to share new discoveries daily, as well as discuss all aspects of the work on our blog.

Our first priority is to prepare the fossils in the best way possible, and a project as big as the Utahraptor block requires some specialized equipment. We have pared our list down to the most basic items needed to get us through our first year of preparation, and we’ve found the best possible sources for reasonably priced equipment.

Much of this complex equipment is essential to complete the job without damaging these delicate fossils. Only a handful of people possess the skills to safely remove dinosaur remains. Years of sediment deposits and erosion wreak havoc on fossils. This means that only a handful of material from all living things survives the elements. Erosion and scavengers greatly hinder the amount of viable material available to piece together a coherent picture of the diversity of life.

Consider this as a complex medical operation. You would only trust the most qualified surgeons to perform the procedure. The best surgeons rely on high-quality tools and years of experience to make precise movements. These dinosaurs met their fates millions of years ago but they left behind a legacy. We can attain a small glimpse into their world by studying these time capsules.

Providing these specialized tools and qualified personnel will empower the team to fully extract these prehistoric animals and the secrets that they hold.

Settling for less could jeopardize the fate of these priceless remains and destroy evidence. The excerpt below provides details about some of the major tools:

Microscopes are the single most important pieces of equipment needed for this work. We will need two of them so that we can work on the massive block from different sides without getting in each other’s way. Each microscope will need to durable and mobile, with long boom arms so we can work far out into the middle of the block. Both microscopes will have cameras attached to video monitors so we can show you exactly what we are doing, even live-stream for special interactive events for project supporters!

Get Involved with the Utahraptor Project

The luxury of our digital age provides us all the opportunity to witness history in the making. Cameras on site will allow the public to witness the extraction process like never before possible.

Donors will be among the first to learn the many secrets held within the rock through regular updates. There is a sense of fulfillment to make an impact on this type of research through a contribution to science.

The team has already purchased some of the necessary equipment and is making daily efforts to expedite the process. Small sections receive routine attention from paleontologists in their spare time. Once the goal is met, these scientists will have the funds to delegate more time to the extraction.

Many of us grew up with ambitions to become a paleontologist; along the way, many of us gave up on that dream. We cannot fully take part in the research efforts. Instead, we look on from afar at the work of scientists. By taking action in the ways that we can, we play a small part in important work that drives the field of paleontology forward.

Imagine how our children and grandchildren will view dinosaurs. Their books will portray a more accurate depiction of the prehistoric world than we had ever imagined. Don’t believe this? Just take a look at the books written a mere decade ago. In a previous post, we explored the drastic shift in public attitudes toward dinosaurs since the nineteenth century. There we highlighted some extraordinary finds that propelled scholarship forward.

This block has been sitting since 2015 without any significant attention. We must make this campaign known to as many people as possible to drive this project toward its goal. Sharing this post and the GoFundMe page on social media or through email can help increase visibility to this cause.

Every donation helps. We urge our readers to make any level of contribution possible. Small donations chip away at the goal. Donors can even write off contributions on their taxes.

While many people donate to causes that tug on the heartstrings, paleontology does not draw the same level of urgency. This is why reaching out to those who appreciate science remains so crucial. If you find this content useful, please share it with your friends.