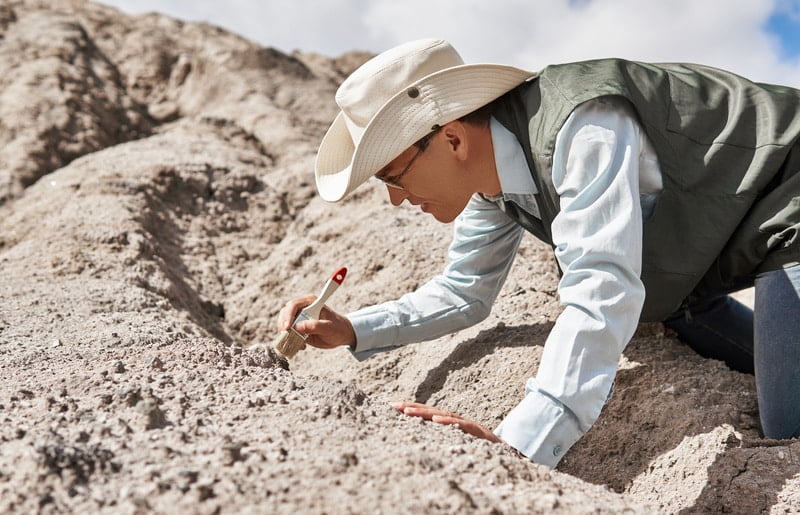 As a child, I often annoyed everyone around me talking about dinosaurs nonstop. Honestly, I still do this. Though one thing always annoyed me too. Why did everyone think that I wanted to be an archaeologist?

In this article, I will break down all three in depth to clear this up and showcase why both professions serve a crucial role in our understanding of the past. Keep reading.

Why distinguish between these two fields? Perhaps it could be assumed a mere clerical error with only minor distinctions.

While these fields share many things in common, it’s important to show these scientists respect by better understanding their professions. That’s simple enough, right? Yet. even major news organizations confuse the two regularly.

Paleontology is the study of ancient life, primarily non-hominid life forms. Paleontologists rely on fossils for their research. What is a fossil?

Fossils are preserved remains of once-living organisms. These can include bones, shells, and imprints such as tracks or soft tissues, Fossilization is extremely rare for organisms, requiring a perfect set of conditions for preservation.

Thus, the gaps in the fossil record necessitate scientists committed to collecting samples and researching theories to formulate a more comprehensive picture of the past than we currently have. Each fossil represents a specimen that preserved despite the adverse environmental conditions such as erosion and scavengers.

Paleontology represents a diverse field of scientists that study a multitude of different life forms. Of course, dinosaurs remain the most popular. Some specializations include:

We have a full article dedicated to careers in paleontology. Here we cover some things to consider if you’re interested in this career path. Additionally, we have covered in-depth why paleontology matters.

Archaeologists study human artifacts to test hypotheses of human history and development. The excavation sites of archaeologist are much younger geologically, and therefore less reliant on fossils. Items studied can include pottery, art, clothing, and even mummified human remains that survived the elements.

While paleontologists do damage environments to extract fossils, archaeologists often need to be more careful. Excavation sites need special care to respectfully study the people that left the artifacts behind.

Digging up human remains presents different ethical concerns than that of extinct animals. Through a careful examination of human artifacts, archeologists can gather data to expose culture, habitat, diet, and more about our ancestors.

Simply put, the study of human progression throughout history is the realm of archaeologists. Just like paleontologists, archaeologists often specialize in a particular sub-discipline. Some examples include:

If you’d like to learn more about careers in archaeology, the Archaeological Institute of America has an excellent resource on the topic.

By now you probably have a clear understanding of the differences between paleontology and archaeology. Now we can move on to their similarities.

Similarities Between Paleontology and Archaeology

While the first half of this article highlighted the primary differences between paleontology and archaeology, it’s easy to see how the average person could confuse the two.

Tools of the Trade

The need to remove sediment to extract delicate remains requires a plethora of specialized instruments. Additionally, devices such as GPS and cameras may be required to survey sites.

If you’d like to learn more about the tools that paleontologists use, we have a complete guide to fossil hunting for beginners. You can use this resource to begin collecting fossils, or perhaps artifacts, as a hobbyist.

Once the items have been recovered, these scientists often transport them to museums for further analysis. While some archeological sites cannot be transported for analysis, most paleontological research occurs indoors.

Microscopes, computer software, chemical cleaners, and other gadgets may be used by both paleontologists and archaeologists for analysis. Since scientists tend to employ similar research methods across broad areas of study, the processes used tend to overlap.

While the subjects of research differ, both paleontologists and archaeologists follow the scientific method. Researchers propose hypotheses and formulate experiments or observational research to test them. This often requires aid from scientists in other fields.

If, for example, an archaeologist found a fish specimen at a preserved camp site, an ichthyologist might be contacted for classification. The combined efforts of these two scientific disciplines could support the hypothesis that this particular fish was a popular food source for this group of people.

Paleontologists collaborate in a similar fashion. In fact, the dinosaur extinction, a notorious debate among paleontologists, was potentially solved by a physicist named Luis Alvarez. You can learn more about this discovery on the patheos.com blog.

Further, archaeologists and paleontologists tend to use the same scientific principles in the field. One notable example, the Law of Superposition, can help identify the age of artifacts and fossils. The Law of Superposition, states that sedimentary rocks on the bottom are older than those at the top. Both paleontologists and archaeologists use this knowledge to target and identify discoveries in the field.

When prospecting for fossils or artifacts, both types of scientists must understand typography, geology, and observe local laws. Laws exist restricting land use and ownership of items within. Notably, both fields suffer from collectors and looters who’d rather sell items for profit than for scientific study.

What’s the Difference Between Paleontology and Archaeology?

What’s the Difference Between Paleontology and Archaeology? While they both share similar methods, the scope of study is entirely different.

While it can be irritating when others confuse these two scientific disciplines, it is an honest mistake. The fact that both paleontologists and archaeologists use similar methods in excavation and research leads to confusion within public discourse.

Media portrayals such as Indiana Jones and Dr. Alan Grant do little to clarify the distinction between these fields. While both serve as action heroes, the real heroes are the scientists that contribute to discovery of our planet’s past and our own.

Hopefully you enjoyed this article. If you learned something or believe that it could help others, please share it with someone you know.