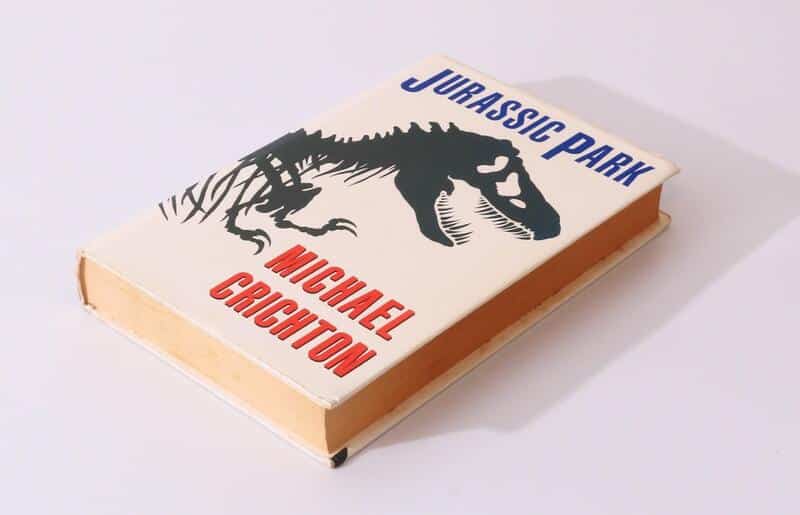 The Jurassic Park novel represents one of the finest works of dinosaur fiction ever published. This novel remains the signature work of the late author Michael Crichton. The book underwent many revisions, eventually turning from a child-friendly story about dinosaurs into a sci-fi horror novel.

Crichton’s final work achieves a far darker tone than what was eventually adapted for the big screen. This novel works at a fundamental level because Crichton understood how to create believable fiction grounded in science.

Jurassic Park takes an outlandish premise, one of genetic engineering extinct species, and produces a captivating narrative that earns a sense of trust. Readers can make the leap into this fiction because of the author’s hard work to include research from some of the leading experts of the time.

Taking cues from prior works, Jurassic Park manages to bring dinosaurs into our world in the most logical way possible: unchecked hubris.

Despite Crichton’s warnings, scientists in our world persist in efforts to bring extinct animals back to life. Dinosaurs are of course the primary appeal of this novel, yet they serve only to propel the plot.

Meanwhile, numerous unidentified animal attacks occur on the mainland. The folklore surrounding these attacks sparks terror. A group of scientists makes a trip to the island to conduct an initial tour. Though astounded by the prospect of living dinosaurs, the scientists present a grim outlook. There are greater forces at play that expose the folly of man in the pursuit of discovery. Complex systems on the edge of collapse soon reach the tipping point.

Any fan of the Jurassic Park movies should definitely read Crichton’s masterpiece. It is by far one of the greatest science fiction novels. The tone is far darker than anything seen on the big screen and provides a more insightful message about the illusion of control. These warnings remain as relevant today as ever.

Michael Crichton was one of the most accomplished authors of our time. He is credited with dozens of novels, movies, and television programs, typically involving scientific subjects. Crichton incorporated his educational background and his passion for learning into his writing. Growing up, Crichton gravitated to works of science fiction. This affinity for reading helped to propel his career by providing inspiration and a means to challenge himself to measure up to icons of the genre.

He demonstrated an affinity for writing at an early age. A fourteen-year-old Crichton had an article on travel published by The New York Times.

Crichton earned his B.A. in Anthropology from Harvard College and M.D. from Harvard Medical School. While this educational path seems odd for a career as an author, Crichton’s background enhanced his ability to work with publishers, actors, and various experts he routinely consulted.

A modern renaissance man, Crichton’s diverse talents were reflected in his work. Crichton’s work as an author often eclipses his work as a director and producer. The long-running hospital drama ER has defined the genre. From the sci-fi/western Westworld to the action thriller Twister, Crichton showcased a remarkable talent for injecting fresh ideas into classic tropes.

Sadly, Michael Crichton lost the battle with cancer on November 4, 2008. He left behind a storied legacy. The numerous works that he produced will live on to bring excitement, terror, and intrigue to audiences forever.

Jurassic Park is a brand most recognized by the film series. The source material often goes overlooked by fans. The novel explores so much more than the films as it does not suffer from the same time constraints or from the need to maintain a PG-13 rating.

Most publication copies run around 400 pages, long enough for the depth necessary to tell the story but succinct enough to form a cohesive plot that continually moves forward.

The success of this book, as with many things in life, was not without complications. Early drafts faced extreme scrutiny from Crichton’s peers and forced him to completely revamp his original concept.

I wrote a screenplay about cloning a pterodactyl from fossil DNA in 1983, but the story wasn’t convincing. I worked on it for several years since, trying to make it more credible. Finally I decided on a theme park setting, and wrote a novel from the point of view of a young boy who was present when the dinosaurs escaped. I then sent the book to the usual people who read my first drafts.

Over the years, I’ve come to rely on five or six people who read my drafts; generally they have a range of responses. Not this time. They were all in agreement: they hated Jurassic Park. I got angry reactions such as, “Why would you write a book like this?” But when I asked them to explain exactly why they hated it, they couldn’t put their finger on anything in particular. They just hated it, that’s all. Hated every bit of it.

I wrote another draft. They hated that one, too. Just as strongly as the one before. Whatever I had done in the latest draft, it hadn’t helped. I wrote another draft, but the result remained the same. Finally one of the readers said that they were irritated with the story because they wanted it to be from an adult point of view, not a kid point of view. They said, “I want this to be a story for me.” Meaning for an adult. So I rewrote it as an adult story. And then everybody liked it.

Crichton’s darker tone won the hearts of his critics. We will never know the full story Crichton envisioned. There are countless dinosaur stories targeted at children; what made Jurassic Park so remarkable was its power to appeal to such a broad audience. While the movies toned down the violence and language, we will always be able to revisit the raw and gritty tone so masterfully delivered. It was adapted into one of the greatest films of all time. You can learn more about the Jurassic Park movie in our other article.

Other Books by Crichton

Below is a chronological list of his books, including those under pseudonyms or as a co-author: