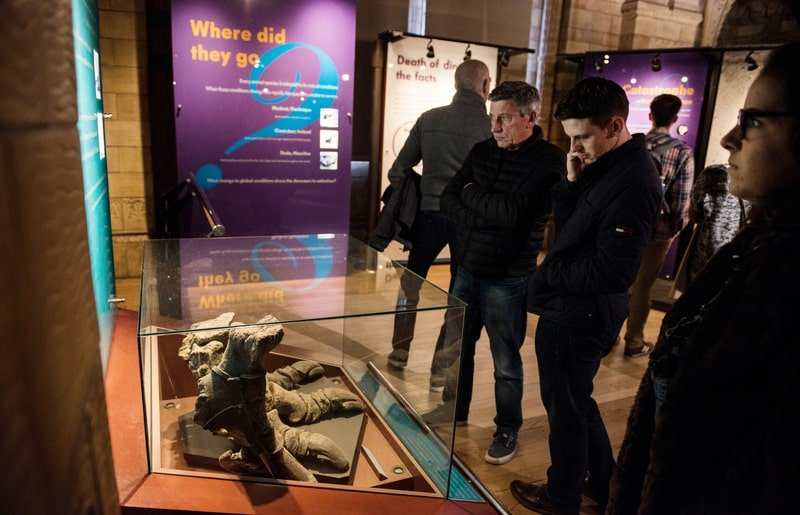 When reading about dinosaurs or visiting a museum you may have wondered, how do scientists determine the age of fossils? Are they really millions of years old?

How do scientists know that, for example, Tyrannosaurus rex lived about 66 million years ago? Are these estimates verifiable?

So, how do scientists determine the age of a fossil? They use two general techniques: stratigraphy and radiometric dating. These methods allow them to accurately date fossils.

To understand how scientists find a fossil’s age, we must first examine these two techniques.

Table of Contents
1 Steno’s Laws of Stratigraphy
2 Radiometric Dating
3 Dating Fossils
4 How Do Scientists Determine the Age of Fossils?

First, we’ll start with stratigraphy. Stratigraphy refers to the art of determining the relative ages of sedimentary rocks. In other words, it tells us which rocks are the oldest, which are youngest, and which fall somewhere in the middle.

Stratigraphy was discovered by a Danish geologist, Nicholaus Steno, in 1669 when he published a seminal work on the subject. His treatise proposed several principles to understanding sedimentary rocks, which came to be known as Steno’s Laws of Stratigraphy. The laws are as follows:

The second law, the Law of Original Horizontality, states that sedimentary rocks are always deposited in horizontal, flat bands. They may not, however, remain flat, because plate tectonics can bend and fold the earth’s crust.

This will also bend sedimentary rocks. Examine the photograph, below, of a rock outcrop in Morocco:

The third law, the Law of Cross-Cutting Relationships, states that when a layer of rock has an intrusion in it, the intrusion is younger than the rocks into which it has extended itself. Can you see the intrusion in the photograph below?

This rock outcrop has a clear intrusion, the band of darker grey rock, running through the center of it. Because of the Law of Cross-Cutting Relationships, we can conclude that the intrusion is younger than the surrounding rock.

The last law, The Law of Lateral Continuity, states that sedimentary rocks are deposited in a continuous, flat plane until something physically stops their deposition and/or erodes them after deposition. This law enables scientists to correlate sedimentary rocks by following their planes. To illustrate this principle, we will again return to the Grand Canyon:

Notice how the mountain in the left foreground is divided into three distinct bands: a darker, more mottled layer at the top, a yellow-brown layer in the middle, and a deep red layer underneath that. Can you see how this pattern is reflected in the smaller peak to the right, even though they’re not connected?

Now, look at the background of the canyon. Do you see a similar pattern in the rock there? Scientists use the Law of Lateral Continuity to connect all of those rock layers even though they’re not physically connected.

These four laws are illustrated in the image below. Can you relate each image to its corresponding law?

Now that you’re familiar with the Laws of Stratigraphy, can you determine the relative ages of the rock units in the image below?

Scientists use Steno’s Laws of Stratigraphy to construct a global framework for the relative ages of rocks. With this framework, scientists can tell which rocks are the oldest, which are the youngest, and which fall somewhere in the middle.

This framework does not tell scientists, however, the exact ages of the rocks. In order to do that, they use a different technique: radiometric dating.

Radiometric dating is a method of finding the absolute age of rocks by looking at radioactive decay within igneous rocks. Contrast this with stratigraphy, which only provides the relative, not absolute, ages.

Do note that radiometric dating is complex enough that it would, at the very least, need its own article. As such, I have limited its discussion to a very brief summary. You can check out this article on geochronology by Britannica to learn more about radiometric dating and similar methods.

Once the absolute ages of certain rocks can be calculated via radiometric dating, the ages of these rocks can be applied to the relative stratigraphic ages obtained from Steno’s Laws.

Even though scientists can accurately estimate the age of rocks and fossils, there’s still a bit of wiggle room in their estimates.

As an example, the Hell Creek Formation of the American West, which contains many famous dinosaur fossils including Tyrannosaurus rex, was deposited roughly 67 to 66 million years ago. Its exact age, however, remains uncertain.

How Do Scientists Determine the Age of Fossils?

The science behind the age of the Earth, stratigraphy, correlation, and radiometric dating is quite complex, has a rich history, and involves much more than is discussed in this article. As such, this article is intended as a sound introduction to some of the basics.

Hopefully, you learned something from this article. If so, please share it with your friends. If you have additional questions or want to add something to the topic, leave us a comment to let us know.