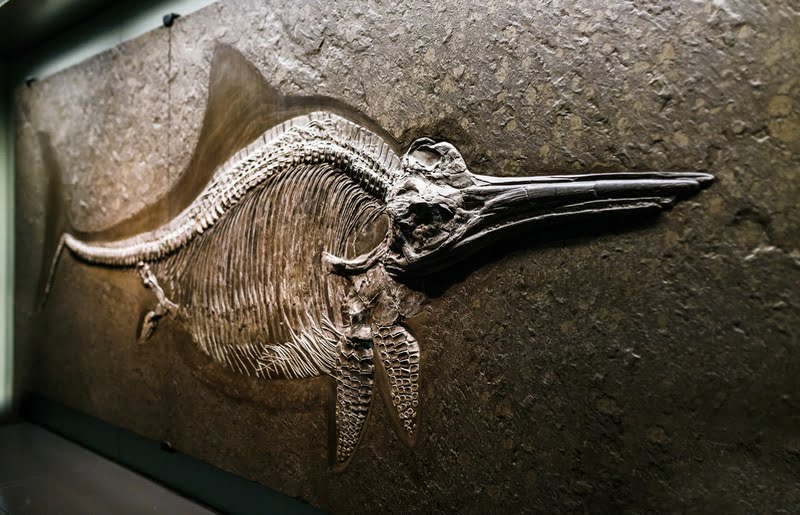 Some of the most well-known groups of prehistoric animals from the Mesozoic Era are the so-called aquatic dinosaurs, and for good reason: they’re large, fearsome, apex predators. So how did aquatic dinosaurs die out?

The answer to their demise requires a bit of an in-depth explanation. Firstly, these are not dinosaurs. however, but rather aquatic reptiles. More on that later.

So they weren’t dinosaurs, but why did these aquatic reptiles go extinct at the same time as the land-dwellers? Global climate change led to a mass extinction that spanned far beyond just dinosaurs, killing 80 percent of all animal life at the end of the Cretaceous.

Before we discuss how they died out, we should first determine what to call these unique animals. Let’s first define what constitutes a dinosaur.

Table of Contents
1 What’s a Dinosaur?
2 What Are The Aquatic Dinosaurs Anyways?
3 Similarities With Dinosaurs
4 The End-Cretaceous (K-T) Extinction
5 But what about the Ichthyosaurs?
6 Other Dinosaur Mix-ups
7 Were Any Dinosaurs Semi-aquatic?
8 How Did Aquatic Dinosaurs Die Out?

In Jurassic World, a massively oversized Mosasaurus devours a Great White Shark before an adoring crowd. This animal, though it was not a dinosaur, was fascinating in its own right. You can learn more about mosasaurs at eartharchives.org.

To understand why, for example, Mosasaurus wasn’t a dinosaur, it will be helpful first to define dinosaurs. Put simply, a dinosaur is any member of the clade Dinosauria. That may sound obvious, but this distinction is defined by scientists using a method known as cladistics.

Dinosauria is comprised of animals that evolved during the middle Triassic Period about 245 million years ago. It includes an incredibly diverse array of animals and goes beyond the scope of this article.

Dinosaurs dominated many of the Earth’s ecosystems for almost the entirety of the Mesozoic Era, and they continue to play important parts in Earth’s biosphere today in the form of modern birds.

Most of the animals traditionally considered dinosaurs, such as Triceratops, Tyrannosaurus, Stegosaurus, Apatosaurus, and many others, are indeed dinosaurs. Just remember that dinosaurs were primarily land-dwelling animals.

Readers should remember, however, that at the same time as the dinosaurs, many other groups of organisms also thrived. The Mesozoic Era contains much more than just dinosaurs! Marine reptiles are one prime example.

What Are The Aquatic Dinosaurs Anyways?

These “aquatic dinosaurs” are comprised of three distinct groups of marine reptiles: the plesiosaurs, ichthyosaurs, and mosasaurs. All three of these groups have evolutionary lineages separate from the dinosaurs, so they’re more appropriately considered distant cousins of the dinosaurs.

The ichthyosaurs include all of the members of the order Ichthyosauria. These animals also evolved during the Triassic Period. Scientists still do not know which clade of animals they evolved from. The ichthyosaurs lived alongside the dinosaurs for most of the rest of the Mesozoic Era but began to go extinct before the end of the Cretaceous.

Unlike the other two groups of marine reptiles, the mosasaurs evolved from semi-aquatic lizards much later during the Late Cretaceous, and they only lived on Earth alongside dinosaurs for about 25 million years until the end of the Mesozoic Era.

Despite the lack of a common evolutionary heritage, the marine reptiles and the dinosaurs nevertheless shared many characteristics. Understandably, people would think of them as dinosaurs.

They were reptiles that lived at similar times, and many of them evolved to become apex predators. They also frequently occur alongside one another in museum exhibits. Of course, they all shared the same ultimate fate: by the end of the Cretaceous Period, they had all gone extinct.

Similar to the non-avian dinosaurs, two of the groups of marine reptiles, the plesiosaurs and the mosasaurs, went extinct at the end of the Cretaceous Period. This occurred around 66 million years ago when a 10-kilometer-wide (6-mile-wide) asteroid struck the Earth.

The asteroid strike drove these animals extinct due to several immediate, catastrophic changes to the Earth’s biosphere. Upon impact, massive dust was thrust into the Earth’s atmosphere.

This dust would have reduced the amount of light that reached Earth. This disrupted food chains globally by reducing the rate of photosynthesis and by lowering temperatures worldwide. Both of these changes would have disrupted ecosystems and driven many species to extinction.

The asteroid strike may have also caused widespread fires and tsunamis. Both of these would have further threatened already stressed ecosystems.

In addition to the asteroid strike, some scientists have proposed that widespread volcanism in modern-day India also contributed to the demise of the dinosaurs by releasing large amounts of gasses into the atmosphere. The gas would further accelerate climate change.

But what about the Ichthyosaurs?

Unlike the other marine reptiles, however, which went extinct at the end of the Cretaceous Period, the ichthyosaurs went extinct several million years before the plesiosaurs and mosasaurs. That means that they died out before the asteroid struck the Earth. What drove them extinct?

Several factors may have contributed to their extinction. One possibility is competition from the mosasaurs.

These two groups of animals shared similar diets and therefore competed for food. The mosasaurs may have simply outcompeted them and driven them to extinction.

The marine reptiles aren’t the only group of animals to be conflated with dinosaurs: many other groups of prehistoric animals have also been incorrectly labeled as dinosaurs.

As an example, the pterosaurs, often called pterodactyls, are one such group of animals often incorrectly referred to as dinosaurs. The pterosaurs were reptiles too and lived at the same time as the dinosaurs.

Similar to the aquatic reptiles, they have their own, separate evolutionary heritage, though they are closer to dinosaurs. They belonged to a group known as archosaurs, which notably includes dinosaurs, pterosaurs, and crocodilians.

If you’re curious how the crocodilians survived the extinction of the dinosaurs, I have another article that covers this subject. It may be helpful to read that article after you finish this one for more context on this extinction event.

Quetzalcoatlus, the largest animal to ever fly, certainly appears dinosaur-like. Below is an artist’s impression of a group of foraging Quetzalcoatlus northropi. Given the animals’ scaly skin and frightening size, it makes sense that people would assume that Quetzalcoatlus were dinosaurs!

Yet another example of an animal that has been incorrectly labeled as a dinosaur is Dimetrodon. This prehistoric genus lived during the Permian Period before the dinosaurs even existed. It wasn’t a reptile but more closely related to early mammals. It’s similarly accurate to describe a Woolly Mammoth as a dinosaur. Yikes!

Observe these two Dimetrodon skeletons on display at a museum in Canada. To a casual observer, these animals could easily be misidentified as dinosaurs, even though they lived before the dinosaurs and weren’t reptiles.

Were Any Dinosaurs Semi-aquatic?

Even though the “aquatic dinosaurs” discussed above were not, in fact, dinosaurs, some true dinosaurs were indeed aquatic and could appropriately be called “aquatic dinosaurs.” One of the best examples is Spinosaurus, the star of Jurassic Park 3.

This dinosaur lived in ancient waterways in modern-day North Africa. Scientists know that Spinosaurus was aquatic because of its conical teeth, long, narrow skull, and nostrils placed back near its eyes. All of these adaptations would have helped it hunt and eat fish, which would have necessitated spending large amounts of time in the water.

How Did Aquatic Dinosaurs Die Out?

So while the notion of aquatic dinosaurs may be a misnomer, you are now more knowledgeable than most people. You recognize that many unique animals coexisted with dinosaurs and shared similar traits.

Living in the ocean did not save these aquatic reptiles because global climate change devastated the food chain worldwide. The loss of primary producers who derive energy from sunlight leads to devastating loss throughout ecosystems. Likewise, competition from more adaptable animals drove several groups to extinction.

While 80 percent of life on earth went extinct at the end of the Cretaceous, those that survived managed to reclaim the Earth and evolve into the niches that dinosaurs once held in the new world.

I have another article that explains how crocodiles survived this mass extinction. Additionally, you can learn more about the End-Cretaceous extinction from the Sam Noble Museum website.

If you learned something, please share this article with others. If you want any additional topics on this subject then let us know by leaving a comment and it just may become the next article.