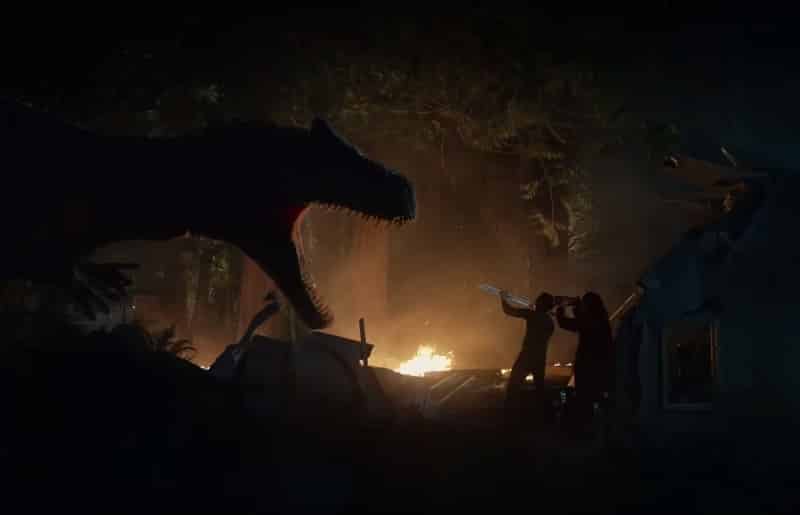 It featured a fierce battle between an Allosaurus and a Nasutoceratops that caught a few unfortunate campers in the crossfire. Battle of Big Rock provides a glimpse into the events one year after the escape of the dinosaurs from Lockwood Manor at the end of Jurassic World Fallen Kingdom. What did it reveal about the direction of the franchise going forward?

The incident occurs at the fictional Big Rock National Park and offers some insight into how the dinosaurs that escaped found new ecosystems to inhabit. Director Colin Trevorrow states that the Allosaurus featured was a juvenile during the auction from the last film.

This marks the first time that audiences have seen a fully-grown Allosaurus in any official Jurassic Park film. It did not disappoint. Despite limits to resources, Trevorrow felt very optimistic about what the crew had achieved.

He touches on the expanded universe that exists now that the animals have found new territory on the mainland. This opportunity highlights the limitless potential for new stories that diverge from those of our main cast.

You can watch the whole eight minutes of Battle at Big Rock here. Parents should note the moderate amount of scary sequences. If you continue reading this article, please watch the short film first to avoid any spoilers. Stay tuned until the very end or you will miss out on some bonus footage taken from other encounters.

Trevorrow sat down with Steve Weintraub of the entertainment website Collider for an interview a few days before the film’s release. When asked about the inspiration behind the film, he told Weintraub:

Universal asked if I’d be interested in making a short film and I didn’t give them any time to reconsider. I wrote it with Emily Carmichael, who is co-writing Jurassic World 3. It felt like a first step into a larger world after the last film. You have these animals loose in an unfamiliar environment, they’re disoriented, struggling to adapt. The first people they run into are bound to be camping. I wanted to see that.

This expanded universe element differentiates the Jurassic World trilogy from the Jurassic Park trilogy. Dinosaurs on the mainland provide us with more probable encounters with humans.

This allows the writers to delve into more creative storytelling than previously possible. This element has made for high tension in the prior movies as well.

Despite criticism of the sequence, no one can deny the fact that the Tyrannosaurus attack on San Diego made audiences uncomfortable in a different way than that of people stranded on an isolated island.

Bringing the threat home connects the audience to the danger in a more palatable way. Trevorrow articulates the mindset behind these new stories in this. He explains:

The world is bigger than just the characters we’ve been following in the films. We’ve finally taken the story off Isla Nublar, we wanted to show a glimpse of that new reality. If this really happened, you’d see a series of random disconnected incidents that would create a pattern of chaos. I wanted to see one of those incidents.

The level of passion for the material should excite fans of the franchise. While not everyone appreciates the direction taken by the Jurassic World films, we can all agree that Trevorrow has tremendous respect for the series. He could have easily overlooked the project, passing it down to another director in favor of focusing on Jurassic World Dominion or other jobs.

His involvement as a writer on the project, alongside Emily Carmichael, highlighted the great potential these two writers have to craft a meaningful conclusion to the franchise. Fans should have renewed confidence after seeing how the world has developed thus far with great respect for author Michael Crichton’s vision for the series.

Of course, pleasing fans remains a tall order, but from what I have seen in the hours following Battle at Big Rock, this film hit its mark.

What We Learned from the Film (Spoilers)

The opening sequence offers an atmosphere similar to what viewers might expect from The Walking Dead. We see a family on a camping trip enjoying a peaceful evening. As our family settles down for dinner, the horned-dinosaur Nasutoceratops emerges from the woods.

Though rattled, the family treats the situation the same as if it had been any other modern animals raiding the camp. Naturally, one of the children describes the animals as herbivores that present no real danger. We all knew that this would soon change.

As expected, the situation escalates once the Allosaurus attacks. Unable to make a meal out of the Nasutoceratops, it turns to the human onlookers from the RV. Here, fans of the franchise might recognize the Easter-egg parallels to The Lost World Jurassic Park. The framing of shots as this predator destroys the RV hearkens back to the earlier film almost frame-for-frame at times.

The battle culminates in the little girl saving the day. One well-placed shot to the eye of the Allosaurus sends the predator away. The family escapes this encounter, but the camp lies in ruin. This event establishes the instability of the world in the age of dinosaurs. This notion continues in the bonus footage that follows.

A series of found-footage shots provided at the end drive home the dangers of this new world. In the first, we see a humorous shot of a little girl chased by a flock of Compsognathus.

Next, a soothing shot of a Parasaurolophus drinking while a boat rows past. The next sequences reveal a much darker tone.

A dash camera provides a video of a Stegosaurus taking a swipe at a vehicle, sending it careening off the road and down a cliff. The most iconic shot comes next, as a Great White Shark delivers a Polaris breach on a seal just before the Mosasaurus makes a dramatic breach of its own, swallowing the shark whole.

Finally, we see doves at a wedding fall victim to a bigger aerial predator, Pteranodon. This bonus footage goes beyond anything alluded to in promotional material. For this, the crew deserves a huge thanks. Wrapping these phenomenal shots sets the bar high for the final entry in the series.

Merchandise for Battle at Big Rock

Long before many fans even knew about the short film Battle of Big Rock, collectors of Mattel toys found some interesting additions to store shelves.

While browsing stores, fans found two amazing toys with vibrant paint jobs: Allosaurus and Nasutoceratops. Many learned of this short film through the packaging that proudly displayed that these two dinosaur rivals would engage in battle.

The 2019 Jurassic World Dino Rivals toys have been impressive thus far. Mattel acquired the rights to make official Jurassic World merchandise after the terrible quality toys produced by Hasbro in 2015.

In contrast, Mattel has created many pieces of merchandise for fans of the franchise. They continue to create new sculptures of dinosaurs and entirely new creatures. Hasbro, however, repainted the same subpar figures countless times.

The figures tied to a promotional film took a step beyond what other companies might do. Truly, Mattel spared no expense. You can occasionally find these online, however, the reseller market can be brutal due to scalpers jacking up prices.

What’s Next for the Jurassic World Saga?

Trevorrow expressed his view in interviews that many crucial parts of the last movie lost their impact due to the trailers revealing too much. This film remained incredibly secretive with only a small portion shown in a teaser trailer the week of its release. The toys revealed the two combatants but did not spoil any plot details.

Understandably, this eight-minute film does not demand the same level of promotion as the feature films. Nevertheless, the reception of this short could encourage a level of restraint when promoting the next movie.

While many trailers reveal far too much these days, fans must stress to the studios the value of subtlety. The element of surprise made each sequence far more suspenseful.

Many casual moviegoers will never see Battle at Big Rock. For those who have, it provided an exceptionally well-crafted interlude into the final act. Could we see additional short films leading up to the theatrical release of Jurassic World Dominion? While no evidence points in this direction, nothing remains out of the question.

The Battle at Big Rock serves to keep audiences talking about the franchise during the downtime. Stay tuned for more news as we inch closer to Jurassic World Dominion. Let us know what you thought of Battle at Big Rock in the comments. If you find this content useful, please share it with your friends.