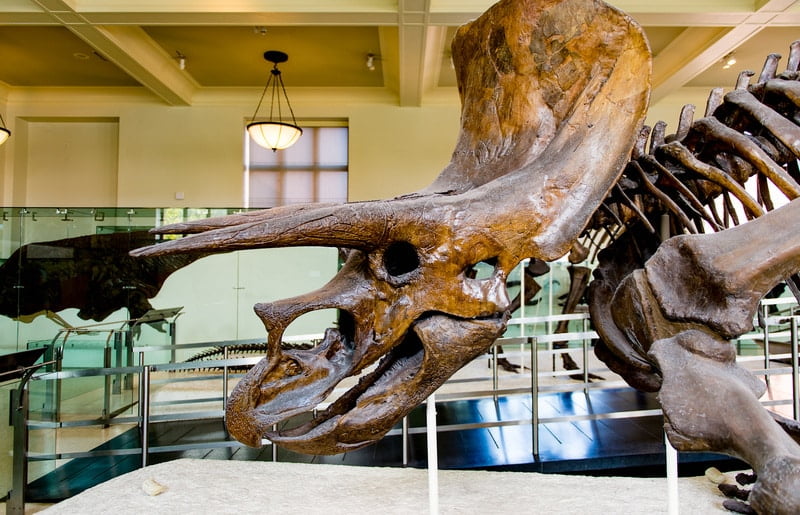 One of the most famous Tyrannosaurus rex skeletons, “Stan” the T. rex, may also be the most well-traveled T. rex. At the moment, he currently resides in Texas, New Mexico, Washington, D.C., Kansas, Wyoming, Indiana, Wisconsin, the United Kingdom, and even Tokyo, Japan.

There’s only one Stan, so how can he be in so many places at once? The answer is simple: people made and distributed replicas of his skeleton.

You might wonder: are dinosaur bones in museums real fossils? While some displays use real fossils, many bones on display are replicas. Scientists may make replicas of fossils from dinosaurs and other animals for several reasons.

First, fossils are often rare and valuable, so museums may need to purchase replicas instead of original fossils in order to add them to their collections. Second, replicas of fossils make it easier for scientists worldwide to research particular samples. Lastly, replicas may be made simply for practical purposes.

Table of Contents
1 The Case for Composite Skeletons
2 Fossil Reconstructions
3 Are Dinosaur Bones in Museums Real?

The Case for Composite Skeletons

In the case of Stan, for example, his skull proved too heavy to display on his skeleton. Thus, his skull was displayed close to the ground and his skeleton had a much lighter replica attached to it.

Consider Sue, a T. rex on display at the Field Museum in Chicago, Illinois: although she is the most complete T. rex yet discovered, only 90% of her skeleton by volume and 250 of her approximately 380 total bones were discovered.

That means that approximately 130 bones had to be added to her skeleton to account for all the gaps! See the image, below.

Scientists call skeletons such as Sue composites because they include material from multiple skeletons. Indeed, almost all dinosaurs on display in museums are composites. Finding a 100% complete dinosaur skeleton is extremely rare.

The above image highlights Sue’s real bones in bright green, while replicas of bones from other T. rex skeletons remain dark and unhighlighted. Note that I could not confirm whether any of the bones from the other animals were real.

Her skull isn’t highlighted; that means that it, too, is a replica. Just like Stan, her skull was too heavy to mount up in the air, so it’s located in a display case nearby.

If you want to learn more about Sue, you can read about this dinosaur on the Field Museum’s blog. Be sure to check out her recent makeover too.

In some instances, a skeleton may be found that is so rare that no other skeletons of that species have yet been discovered. Or perhaps multiple specimens have been found that are all missing the same bones. When these situations occur, scientists must either choose to leave any gaps in the skeleton blank, or they may instead make their best estimate as to what the missing parts looked like and try to reconstruct them.

As their understanding of the species continues to improve, their models will grow better and better until they, hopefully. resemble what the animal actually looked like in life. If the fossils in question are one-of-a-kind or too large, heavy, or fragile to transport, they are less likely to become mounted.

Indeed, this process of figuring the skeleton out occurs with every dinosaur species discovered, because so many skeletons are missing bones. This gradual advancement of paleontology relies on procuring new quality specimens. We have an in-depth article that explains why paleontology is so important.

Consider Parasaurolophus walkeri. The above image shows the first discovered skeleton, known as the holotype, of P. walkeri. Notice that it lacks two legs and most of its tail.

When this fossil was discovered, its discoverers likely could only guess what the rest of the animal looked like. As more fossils of this species have since been recovered, scientists have been able to come up with much more complete reconstructions of this animal.

Take a look at the sample on display at the Field Museum in Chicago shown below. How do these two skeletons compare?

Are Dinosaur Bones in Museums Real?

Many of the fossils on display in museums worldwide are real, but many are compiled from replicas of original fossils. Scientists make these fossil replicas because the original fossils are often rare, valuable, fragile, difficult to transport, and/or scientifically valuable.

Given this fact, replicas make fossils more accessible to both the public and scientists for outreach, display, and research purposes. The missing bones may not even exist, and therefore, are created from our knowledge of similar animals.

So when you see a dinosaur on display, remember that while not all bones are authentic, they represent the most accurate display possible given the reality of fossil display.

Please share this resource with others if you find it helpful. Leave us a comment if you have any further questions or ideas for future topics.